I wrote last week about a collaborative project between my group of established (read, on the old side) artists and a group of younger, hipper artists, and showed you the piece that I started and was finished by a collaborator.  Here's the other part of the story: the piece that I received to finish. 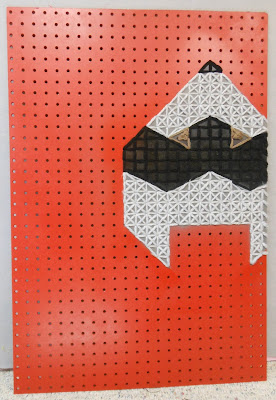 I was totally at sea about what this piece was about.   It was a large piece of red pegboard with an off-center geometric design made by stitching heavy acrylic yarn in a formal cross-stitch pattern.  If you held it one way it looked like it could be a raccoon, which immediately filled me with horror.

We live right next door to a big park, and raccoons and their marauding small-animal compatriots are enemies to our gardening household.  Also I've always been wary of raccoons since one took up residence in our attic decades ago and gave us one awful time getting rid of him.

So I immediately turned it the other way up, at which point the shape looked like it could be a pencil, the interpretation I chose to give it.

I was first drawn to the big empty space at the bottom, and decided to play on the stitched-textile sensibility of the big shape by doing some stitching of my own.  I found a bunch of selvages in warm colors and filled in the bottom part of the board using a technique like the sewing machine, with a "bobbin thread" underneath that came up to loop around the top "thread" and then pulled it down through the hole. 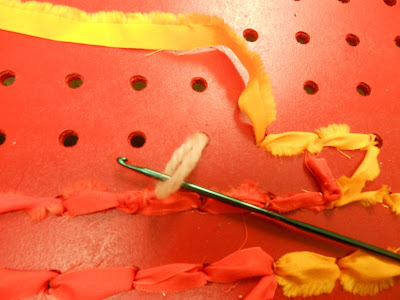 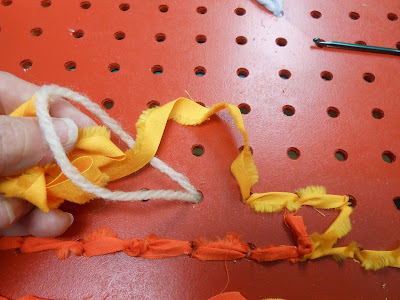 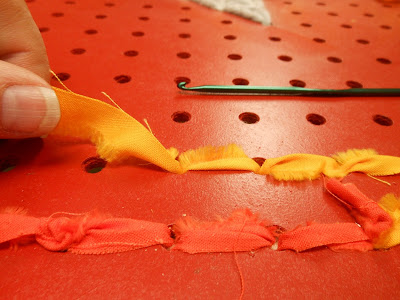 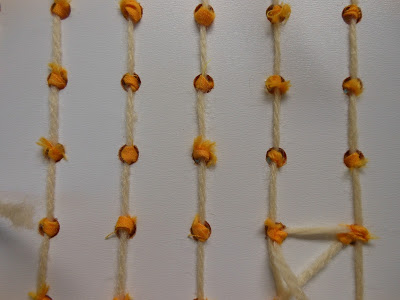 But what to do next?  Stay tuned.


Posted by Kathleen Loomis at 6:09 AM