I wrote last month about a project that I was involved with, where one artist started a piece, then turned it over to a collaborator to finish.  I wish I could say that everybody who participated was thrilled with  what happened, but that wasn't so.  I've thought about this and talked about it with some of my cohorts, and it seems to be an object lesson in expectations.

As I review my own experience with the project, I realize that when I worked on part one, I visualized too far ahead.  In effect, I completed three-quarters of the piece, leaving one-quarter blank for my collaborator to fill in.  I expected her to work in that space, and perhaps add some extra stuff in the emptier spaces of "my" three-quarters. 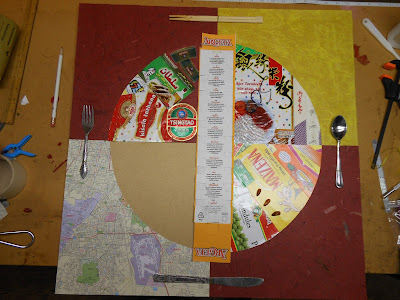 What I did not expect was that she would work not only in the empty space but over the top of "my" spaces.  Nor that she would remove some parts of my composition.

At first I was annoyed to see what had happened to the piece.  But 24 hours later I had revised my opinion and decided the finished piece was satisfactory.

I also decided that if I were to participate in another such project in the future -- which I would be very happy to do -- I would do a few things different.  First, I wouldn't finish so much of the piece before handing it on.  Second, I wouldn't get so clear a picture in my mind of how it might be finished by somebody else.

A wise therapist once told me, "The key to happy parenthood is lowered expectations."  In the context of art collaborations -- especially blind ones, where you don't have a chance to talk to your co-worker -- I think the key to happiness is to have no expectations at all.

One of the most successful pieces in the show, I thought, was this collaboration, started by Sarah Duncan, who simply provided three landscape photographs printed onto fabric, without mounting them, sewing them together or doing anything else to indicate how the piece should be finished.  In other words, she made raw materials for her collaborator. 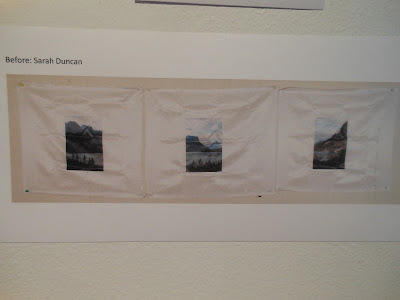 Here's what Jacque Parsley did with the photos: 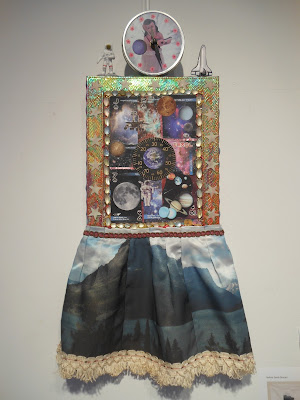 Here's another success, in my opinion.  The part-one artist, Keith Kleespies, turned in a paper construction with images printed or drawn onto different kinds of paper.  Although he hadn't thought of this as "making raw materials," that's the way it turned out. 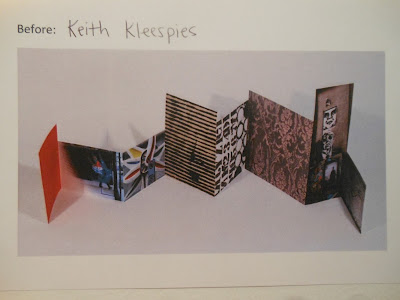 To his surprise, Karissa Moll took apart the construction and saved only one bit of it, the red page at the left end.  She scanned in the rest of the images and put them on an old window. 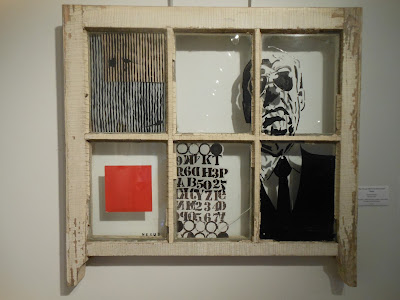 But other collaborations weren't as successful -- at least if you asked the part-one artists.  I'll show you a few in a subsequent post.