So enough of this Mona Lisa stuff, let's hear it for the avant-garde!  As I wrote last month, I left the Louvre in the midst of an anxiety attack, exacerbated by a police presence forming outside and some shouting protesters.  Wasn't sure what they were shouting about; earlier that week there had been a huge march against gay marriage (just legalized), but it might have just been a soccer riot (two weeks earlier there was a HUGE one around the Eiffel Tower). 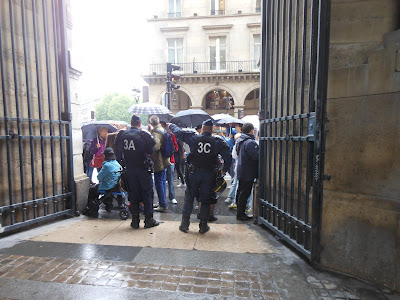 We learned later that Angela Merkel, the German prime minister, was about to make a ceremonial visit to the Louvre for a controversial exhibit of German art.  Our knowledgeable and irreverent guide had told us earlier that the gist of the show apparently was that German Romantic painting led directly to Hitler.  On my way out the door I had briefly considered visiting the exhibit, but couldn't find how or where to buy a ticket, and when I learned what had happened that afternoon I was glad to be gone.  When my husband and others in our group left the museum about an hour later, the entire grounds were teeming with police; Ken counted 11 vehicles in the plaza and most of the walkways were blocked.

After I cleared the impending war zone, a brief walk in the rain to the Centre Pompidou washed away my anxiety.

As you approach the building (not just a museum but a venue for concerts, conferences and other special events), you get an outdoor tableau to get you in the mood for contemporary art. 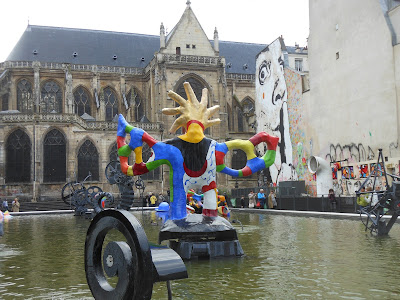 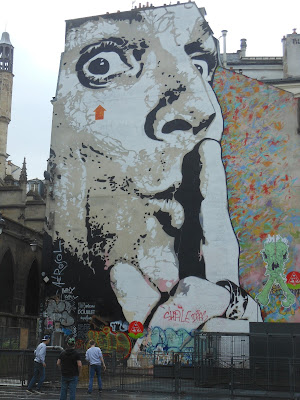 I felt happy just entering the vast courtyard of the building, an architectural world apart from the medieval Louvre.  Famously, the working parts of the Pompidou are placed on the outside of the building, and the big stepped escalator tube is its signature. 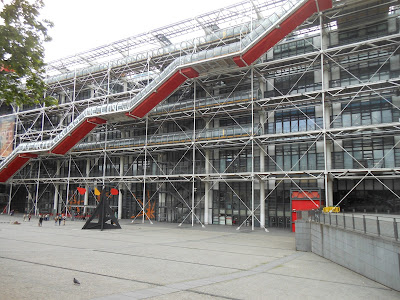 Outside the front door, an Alexander Calder mobile, "Horizontal," which rotates in the breeze. 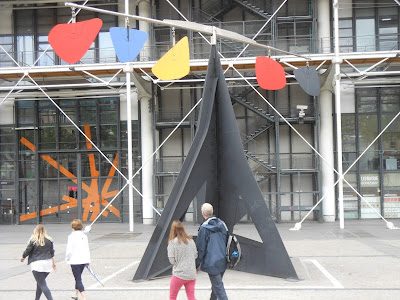 A temporary installation by French "urban artist" Ox consists of a lot of translucent orange tape applied to the windows around the entry doors.  It's called "La fenêtre scotchée" -- probably no translation required. 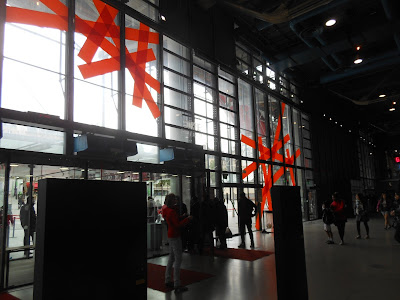 I'll write about the art in later posts; right now, the building itself is a lot of fun.


Posted by Kathleen Loomis at 5:33 AM